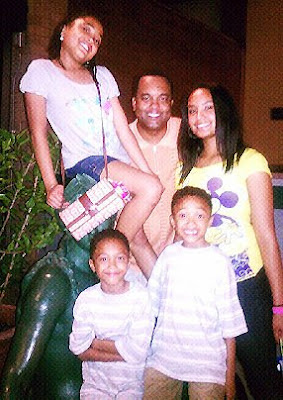 Father of the Year

One of the millions of Engaged Fathers
William E. Rogers is a single father of four children who works extremely hard as an entrepreneur. He does not take his role as a dad lightly. He is very determined to help his children become successful in every area of their lives! Déjà Roger, who is 13 years old, attends Science and Technology High School. She is in the 9th grade and is establishing a 4.0 GPA. She, scored advanced on the State Assessment Test in both Reading and Math, takes Honors English, scored a 275 on the science and tech entrance exam, even though a score of 212 was needed for acceptance into the program, participates in the Science Bowl, takes Algebra 2/Trig.
Her previous School, which was a French Immersion school she became the President of the Student Government Association, played on girls’ soccer team, and helped the girls’ basketball team reach the playoffs for the first time! She is an all around super daughter.
Talia Rogers, who is nine years old, attends a French Immersion School. She is in the fourth grade and has a 3.97 GPA. She scored advanced on the State Assessment Test in both reading and math, and is currently taking 5th grade math. She is a Tae Kwon Do student and her instructor expressed that her skill level is ahead of kids that have been there longer. She is definitely a little leader in the making.
William, III and Edward Rogers are seven year old twins who attend North Elementary. They are in the second grade and are both above grade level in Reading and Math, testing on a third grade level. They are Tae Kwon Do students and enjoy the movements. They are very energetic and loving sons who have interests in PC’s and Science. The budding little scientists are following in their daddy’s footsteps.
Mr. Rogers said, “My children are definitely making me look good! I am so proud of them!